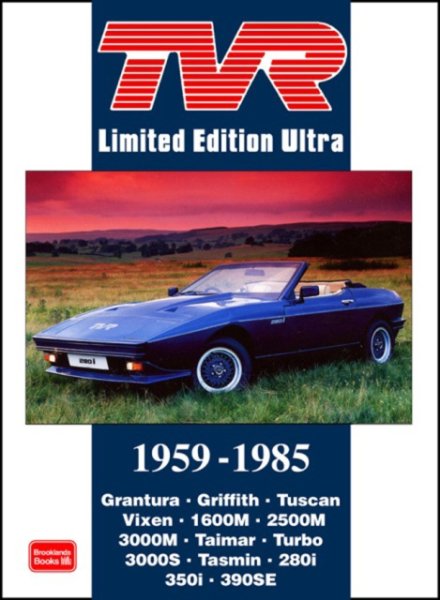 Beschreibung
Beschreibung
Trevor Wilkinson, the founder of TVR, was born in Blackpool in 1923 and left school at 14 to... mehr
Menü schließen
TVR 1959-1985 — Brooklands Limited Edition Ultra

Trevor Wilkinson, the founder of TVR, was born in Blackpool in 1923 and left school at 14 to start an engineering apprenticeship at a local garage. In 1946 he bought a wheelwright's business in Blackpool, renaming it Trevcar Motors in 1947, for the purpose of selling and repairing cars and undertaking light engineering. In 1947, Wilkinson built his first car, a special two-seater body on an Alvis Firebird chassis for himself. As a result, Wilkinson with partner Jack Pickard then started a separate company, TVR Engineering, with a name derived from Wilkinson’s name - TreVoR. Their first car was an alloy-bodied two seater on a tubular chassis, which appeared in 1949.

In 1953 the concept of glass-reinforced plastic bodywork over a tubular steel backbone chassis was accepted, and continued throughout TVR's current production history. In 1954, TVR Engineering was renamed TVR, in light of the launch of the first production car called the Mk 1, later named Grantura. The glass fibre body design and layout remained, in modified form, until replaced by the angular wedge design Tasmin in 1980.

In the 1950s, TVRs were powered by 4-cylinder engines from Coventry Climax, BMC or Ford, the performance models having Shorrock superchargers. As with many other British sports cars, engine sizes remained under two litres, and all produced less than 100 bhp. As most TVRs were sold in the domestic British market, to avoid a British tax on assembled cars many of the early cars were sold in kit form, a practice which continued until the 1970s, when the tax loophole was closed and the kit-form option removed. In April 1962 Wilkinson and Pickard left the company to set up a specialist fibre-glass engineering business. On retirement, Wilkinson moved to Minorca, Spain, where he died aged 85, on 6 June 2008.

In the 1960s, American motor dealer Jack Griffith decided to put a 4.7 litre V8 engine from an AC Cobra he owned into a TVR Grantura, in much the same way that V8s were first transplanted into AC Cobras (It is in honour of Jack Griffith that the TVR Griffith was so-named). TVR came under the ownership of Martin Lilley from 1965 and returned to using a Ford 2994 cc V6 Zodiac engine for the new TVR Tuscan (1967) racer. This produced 128 bhp, giving a 0-60 mph (0-97 km/h) time of 8.3 seconds, which was a good performance for the period. The 1970s saw a number of engines used in TVRs (particularly the M Series), mainly Triumph 2500s, Ford Essex V6s and Ford 1600 Crossflows. Peter Wheeler took over the company in 1981, he was a chemical industry consultant and TVR enthusiast. During this period TVR moved away from naturally-aspirated and turbocharged V6s back to large V8s.