The aluminium Rover V8 high performance engine has been in continuous mass production for 25 years, following an inauspicious start in life. It was rejected by its original American creators in the early 1960s, but the rights to manufacture were taken up by Rover in 1965 and it is now expected that production will continue until the end of this century. Since being adopted by Rover, the V8 has been used in a diverse range of vehicles, from the Rover 3500, the Land Rover and Range Rover, the MGB GT V8, a number of high performance specialist sports cars, and many others. it has also had a succesful competition career in rallies with the Triumph TR7 V8 and in saloon car racing with the Rover 3500 SD1. This is the story of how this versatile engine crossed the Atlantic and found success, together with a thorough technical assessment and details of tuning for increased power output. 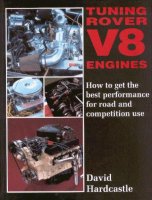