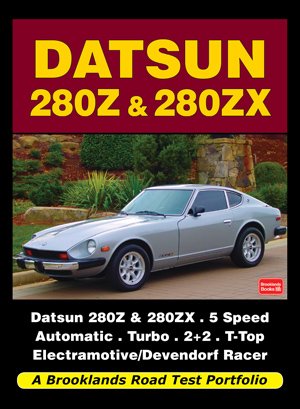 Beschreibung
Beschreibung
Nissan put a Datsun badge on the Austin Sevens it built under licence in the 1930s, and it was... mehr
Menü schließen
Datsun 280Z & 280ZX — Brooklands Road Test Portfolio

Nissan put a Datsun badge on the Austin Sevens it built under licence in the 1930s, and it was with this brand name that the Japanese company entered the UK in the Sixties. Although reliable and economical, initial Datsun offerings were fairly mundane and conventional family cars, but the marque's image received a massive boost with the introduction of the 240Z in 1969. This 2+2 coupe was a runaway success, outselling every European sports car model in the lucrative North American market and the Datsun 240Z/260Z became the benchmark of performance and styling for US aficionados. The model was also sold in other countries as the Nissan Fairlady.

The concept of a front-mounted, inline six-cylinder engine driving the rear wheels caused the Datsun to be bracketed with the iconic Austin-Healey "Big Six" sports cars and the Japanese vehicle was reckoned to be an impressive successor with plenty of character, albeit of a more civilised nature. Agile and quick, the 240Z/260Z was a resounding hit wherever it was sold with more than 622,000 cars streaming off the assembly lines in five years.

The arrival of the 280Z in 1975 heralded the final chapter for the original Goertz-designed "Z-Car" bodyshell and it came with a 2,753cc 6-cylinder engine and also the option of automatic transmission in the USA. Thereafter, starting with the launch of the 280ZX in 1978, in the eyes of some critics the coupe's specification suffered somewhat in comparison to the earlier creation.

Not only was the new 280ZX wider, larger and heavier than its predecessors, the classic elegance of the first generation’s coupe styling had also been replaced by a rather cumbersome look. Fuel injection, disc brakes all round and a revised semi-trailing independent suspension arrangement at the rear were all considered to be positive upgrades, but the top speed was reduced to 115mph (from 125mph) and acceleration was slower than before. Nevertheless, despite now being more of a boulevard cruiser than a high-performance sports car, the 280ZX was still extremely popular, Nissan-Datsun selling over 70,000 examples in America alone during 1979.

Variations of the 280ZX included a 2-litre Nissan Fairlady 280ZL/ZT for the Japanese market and a Turbo model sold exclusively in the USA, with a Targa-top version available in UK from 1981 onwards. Sales of the 280ZX had reached over 446,000 units by the time production came to end in 1983 and, as one of the most popular sports coupes of the past four decades, these cars will undoubtedly be cherished by future generations of enthusiasts for many years to come. Included are road, track and comparisons tests, a service guide plus full technical and performance data.