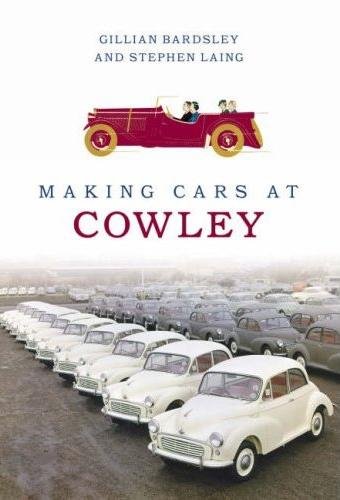 Description
Description
by Gillian Bardsley and Stephen Laing In 1913, when Cowley was a village separated from... more
Close menu
Making Cars at Cowley

by Gillian Bardsley and Stephen Laing

In 1913, when Cowley was a village separated from the sleepy university town of Oxford by green fields and woodland, a thrusting young entrepreneur named William Morris converted a derelict military college into an assembly hall for motor vehicles.

The story of how he launched Oxford into a new life as an industrial town is told in this book. From Morris Motors and Pressed Steel, via the British Motor Corporation and British Leyland to BMW's launch of the new Mini, the story is told by historians from the Heritage Motor Centre at Gaydon, near Banbury, using photographs culled from the archives.

The Authors concentrate on the early days, with only one page of words devoted to the period after 1960. The story is told overwhelmingly from the point of view of the bosses, with no mention of strikes or trade unions, but it nevertheless paints an interesting picture of life at Oxford's first mass-production factory.