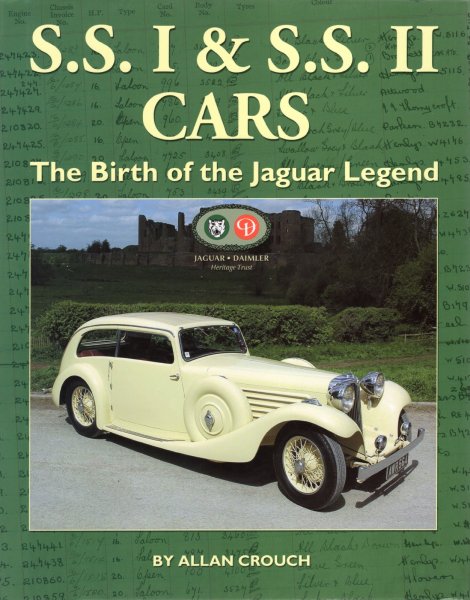 Description
Description
by Allan Crouch The story of the development of William Lyons's business career, and of the... more
Close menu
S.S. I & S.S. II Cars — The Birth of the Jaguar Legend

The story of the development of William Lyons's business career, and of the growth of his stature in the British motor industry, is well known: his formation, with a partner, of Swallow Sidecars in 1922, the move in 1927 from building sidecars to designing and making special coachwork for existing models of cars, and the launch of the first complete S.S. car in 1931. All this is covered in every history of Jaguar, but usually in brief, as a prelude to the study of Jaguar's great days, from the 1950s on.

The author of this book, however, has focussed on a short but extraordinarily significant period in this story. From 1931 to 1936 Lyons, through his company S.S. Cars, was atternpting a breakthrough into the mainstream of the motor industry. It was a make-or-break venture, and it was successful.

The cars with which he launched his career as a manufacturer, the S.S. I and the smaller S.S. II, bore all the hallmarks of Lyons's creativeness and acumen. He made a sound and advantageous deal with the Standard Motor Co. for the supply of chassis, engines and running gear modifled for use in the S.S. cars. He styled the cars hirnself; exhibiting his uncanny knack of knowing what would please the public imagination. He forecast and planned the production runs, and therefore the sales potential, with pinpoint accuracy. He costed the cars so that they could be sold at almost unbelievably low prices - and flnally he brought them to market.

This book is the first ever detailed study, drawing on original research, of these cars and of this critical phase in the history of Jaguar, examining every aspect of the cars' development, production and sales. Full descriptions of all models of S.S. I and S.S. II are provided, with notes on specifications, equipment, performance and press reactions, and a chapter is devoted to competition activities. The author then analyses and explains the factory production records which have been his primary research source, and which yield some fascinating information. The text is accompanied by some 200 colour photographs showing surviving examples of the cars, along with 50 black-and-white illustrations frorn the archives.

Here at last is a definitive account of a little-known era and even less well known cars. It offers an unrivalled store of knowledge for the enthusiasts who care passionately about Jaguar, and serves as a tribute to the cars' creator and to the men who made thern more than 70 years ago.