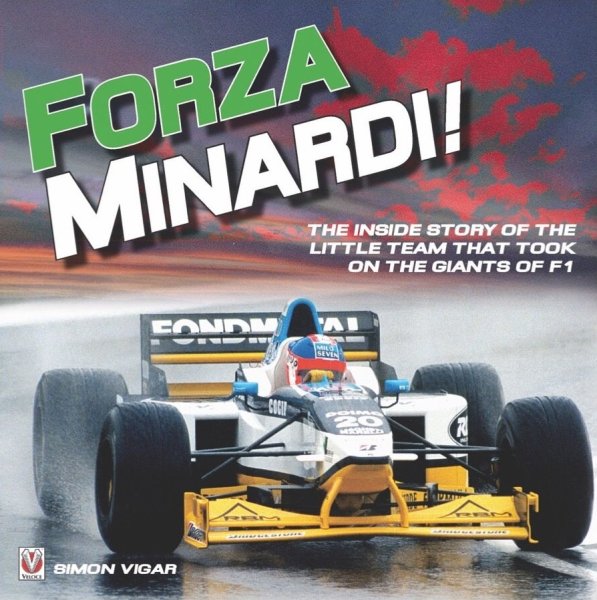 Description
Description
by Simon Vigar After 20 years of glorious "failure", the best-loved team in Formula One is... more
Close menu
Forza Minardi! — The Inside Story of the Little Team which took on the Giants of F1

After 20 years of glorious "failure", the best-loved team in Formula One is consigned to the history books, and it deserves one of its own.

Minardi had a successful time in Formula Two until the tiny Italian outfit was ready to hit the big time in 1985. It somehow survived in F1's shark-infested waters as bigger teams (Lotus, Arrows, Tyrrell) were dragged under. They have a truly international fan-base and are the 'second team' of most F1 devotees.

Minardi is held in such affection as everyone loves the plucky underdog - Minardi's annual budget would have lasted one month at the other Italian team up the road. Yet, from its plant in Faenza near Bologna, Minardi has produced cars that qualify, sometimes score points and often lead the way in their technology.

Gian Carlo Minardi also developed a reputation as a fabulous talent-spotter - Fisichella, Trulli, Webber and the youngest ever World Champion Alonso all started their F1 careers with Minardi.

For the last five years, Minardi was owned by controversial Australian tycoon Paul Stoddart. Cast as David against the Goliath of F1's governing body, Stoddart constantly hit the headlines as he tried to get a more equal share of the sport's billions.

Ultimately, he failed and Red Bull has now bought the team. Despite a petition of 15,000 names the Minardi name has vanished from the F1 grid and true motorheads miss it. This is the one and only inside account, with exclusive, comprehensive interviews with bosses, drivers and engineers. 140 unique photos complete this revalationary tale.