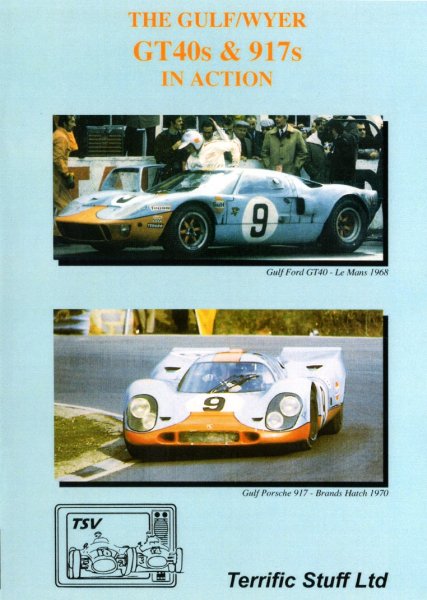 Made by Ferodo to promote their brake linings, this film concentrates on the efforts of the John Wyer team of Gulf Ford GT40s to win the 1968 Le Mans 24-hour race. It begins with a fast lap around the 8.4-mile circuit viewed from the front of a GT40 and described by Stirling Moss. Trees and sand banks line the road and corners and there is not a trace of Armco to be seen. Due to a row between the CSI and Enzo Ferrari there were no Maranello cars in endurance racing that year, Enzo being distinctly miffed by the imposition of a 3-litre limit on sports prototypes, which rendered his superb P4s obselete. Favourites to win were Wyer's "production" 4.9-litre Gulf GT40s, driven by Pedro Rodriguez / Lucien Bianchi; Paul Hawkins / David Hobbs and Brian Muir / Jackie Oliver, but they were soon in trouble with Muir stuck in the sand at Mulsanne on lap 11. Three hours later he had dug himself out, but to no avail, and the Hawkins / Hobbs car retired with clutch and engine maladies. After seven hours Rodriguez and Bianchi were in the lead and remained there, trouble free, until the end, providing a first Le Mans victory for the drivers and Gulf Oil; a second for John Wyer ( his David Brown Aston Martin team had won in 1959) and the third in succession for the marque Ford.

This is a marvellous record of John Wyer's highly successful 1970 season, when his fabulous Gulf Porsche 917s swept to victory in 7 out of 10 Championship races and the equally fabulous skills of Pedro Rodriguez and Jo Siffert thrilled spectators wherever they went. We start in America in Daytona and Sebring and then move to Brands Hatch, where Perdro produced a truly sensational wet-weather drive to win the race. (The sight of him and Seppi Siffert powersliding the 917s out of Druids Hairpin is quite something!) We then go to Monza; Sicily (the Targa Florio); Spa; the Nurburgring; Le Mans; Watkins Glen and, finally, the Osterreichring, where the 917s wrapped up the season with their seventh victory. It is quite shocking to realise that only three of these great circuits - Daytona, Monza and Le Mans - are still in use 22 years later. During the film John Wyer, Pedro and Seppi appear from time to time with their impressions of the races, providing a poignant reminder of the personalities of these three remarkable men, who made such a great contribution to motor racing.