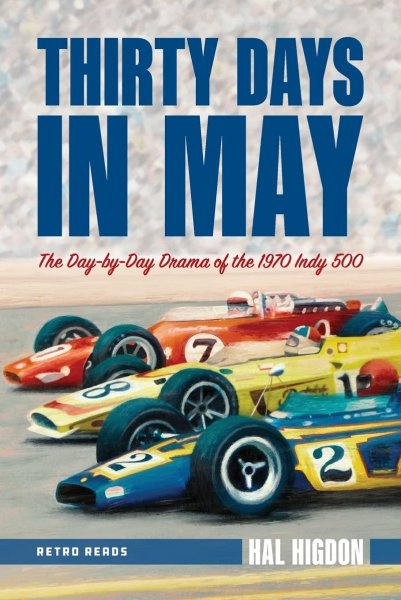 Description
Description
by Hal Higdon Thirty days! From the moment the drivers entered in the 1970 Indianapolis 500... more
Close menu
Thirty Days in May — The Day-by-Day Drama of the 1970 Indy 500

Thirty days! From the moment the drivers entered in the 1970 Indianapolis 500 rolled their cars onto the track for practice until the command “Gentlemen, start your engines,” they faced thirty days of intense action. The drivers needed to go fast enough to earn one of thirty-three starting positions. Only then would they have a chance to win what sportswriters and fans called “the Greatest Spectacle in Racing.”

And award-winning sportswriter Hal Higdon was there to report on the action: hovering in the pits next to the racers in their cars, wandering into Gasoline Alley to tell their stories, absorbing all the excitement the month of May brings to Indianapolis.

This reissue of Thirty Days in May, follows the tale, day by day, of those thirty crucial days—the drivers with fast cars and slow cars, the drivers with rich sponsors and those with little money, the drivers with talent and those who need good luck to place high or even qualify. The list of competitors in 1970 was formidable, and included Mario Andretti, Dan Gurney, Mark Donahue, A.J. Foyt, and the Unser brothers. Add the owners: Roger Penske, Andy Granatelli.

Once the gentlemen start their engines, the race begins. The danger builds. A tiny twitch heading into a turn can result in bent metal and lost lives. Even the fans live in danger.

This is the story of the 1970 Indy 500, but the scenes are repeated on the stained turns of the Indianapolis Motor Speedway year after year.