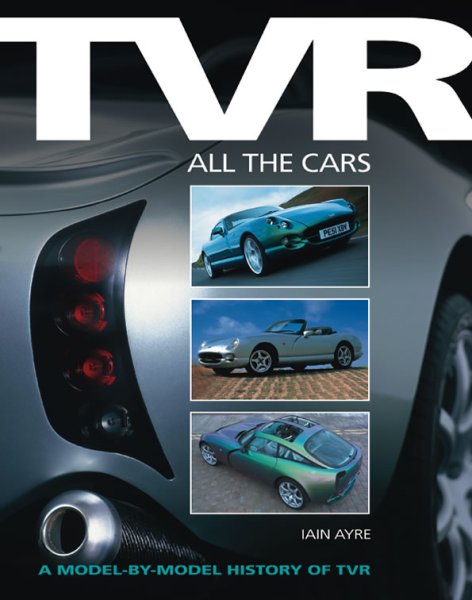 Description
Description
by Iain Ayre Published to coincide with TVR's 60th anniversary, this extensively... more
Close menu
TVR · All the Cars — A model-by-model history of TVR

Published to coincide with TVR's 60th anniversary, this extensively illustrated book documents each and every model produced by the Blackpool marque. Over the last six decades, the TVR brand has passed through a number of owners and has endured its fair share of crises, in spite of which it has left an indelible mark on the motoring world, producing an almost continuous output of hairy-chested, no-nonsense sports cars. Ostentatious styling has always been a TVR trademark, and while not all of its creations have received the plaudits of the motoring press, nobody can deny that a TVR has presence.

The very first TVR, built by founder Trevor Wilkinson, was essentially an aluminium-bodied special based on an Alvis Firebird. Since those formative early years, the company has carved out a niche as a producer of flamboyantly sculpted, unmistakably British performance cars, designed to assault the senses in every way.

The chronological coverage of each model, from the early Alvis Specials to the racing-inspired Sagaris, provides a fascinating insight into the design, engineering and evolution of each car, as well as commenting on the never-dull driving experience offered. Further coverage includes a look at the racing endeavours of the marque, details of the various prototypes and one-offs, and an appendix detailing the engines used over the years. For would-be TVR owners, there is invaluable advice on buying, running and restoring a TVR.