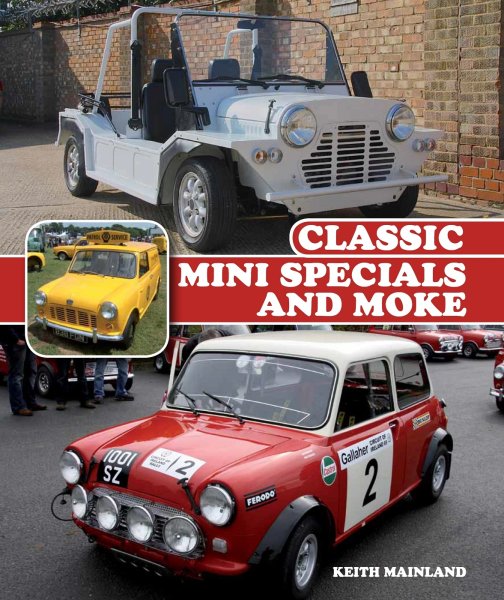 Description
Description
by Keith Mainland Produced from 1959 until 2000, the classic Mini is loved by millions of... more
Close menu
Classic Mini Specials and Moke

Produced from 1959 until 2000, the classic Mini is loved by millions of owners, previous owners and enthusiasts. The Mini's creator, Alec Issigonis, was given a free hand to make a proper small car and his innovative design not only redefined the family car, but also started a revolution as a performance car.

The Mini's wide-ranging appeal meant that it became the basis for many different types of vehicles as soon as it was launched. BMC themselves created a longer wheelbase for estate cars and commercial vehicles, and Issigonis designed the quirky Moke, intended for military use. Ultimately, the Moke did not appeal to the military, but it found favour in sunny holiday destinations and became a symbol of the cult TV series "The Prisoner".

This book explores the diverse range of vehicles that sprang frorn the factory-built Mini, from 1959 up to the end of production and beyond. It covers standard car and commercial models built in the UK and overseas, frorn Australia and Venezuela, as well as race and rally cars frorn the Mk I up to the last Oubman-based "works" competition cars and current historic and one-make series.

It also examines aftermarket conversions based on the Mini shape like the luxurious Radford and Wood & Pickett conversions, the well-known Trickett "Minisprint" model and more unusual conversions such as the Wildgoose motorhorne and Angus Firefly fire truck. Finally, performance upgrades by the likes of Downton Engineering and John Cooper Garages are covered, along with one-off competition vehicles like the "Stripteaser" drag racer and autotest Mini used by WRC Champion Colin McRae at the start of his motor sport career.

If you own a Mini, are thinking about buying one or enjoy finding out more about the car that brought accessible motoring and motor sport to so many people, this book could help make Mini ownership more accessible -and that much more fun.