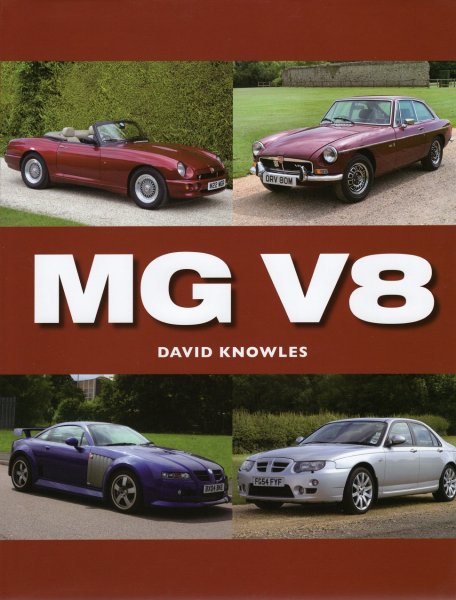 Description
Description
by David Knowles This book tells in unprecedented detail the stories of some of the most... more
Close menu
MG V8

This book tells in unprecedented detail the stories of some of the most powerful and exciting cars ever to wear the evocative MG octagon badge.

For much of its history, the MG name has been associated with modest British sports cars. However, early MG exploits were often concerned with the more rarefied business of automotive sports and racing, with the octagon appearing on some powerful and unusual cars. In the most recent four decades of the marque's history, there has been a series of especially potent MGs united by a common thread - all were powered by a V8 engine of American origins.

Springing from the union of a standard MG sports coupé and an anglicized ex-Buick engine, the V8 version of the MGB owed as much to the opportunism of a canny engineer from Kent as it did to the keen engineers at MG's Abingdon home. The Costello MGB V8 and the following factory-built MGB GT V8 of 1973-76 both showed the potential for a new kind of MG sports car, even if budgetary constraints and the unfortunate timing of the GTV8's launch ultimately undermined the factory car. During the lifetime of the MGB GT V8, British Leyland sank into the mire of public ownership, and before long the famous MG factory was no more.

Two decades on and British Leyland was also no more, its successor having evolved into the Rover Group, which was by now a company trying to carve out a niche in a competitive market place. Rover Group embarked on a bold plan to recapture some of the old MG sports car sparkle. The result was the MG RV8, built between 1992 and 1995, which paved the way for a new generation of MG sports cars.

The subsequent sale of Rover Group in 2000 to a small consortium of British businessmen precipitated what was perhaps the most remarkable and exotic diversion in MG V8 history there has ever been, with the creation of the Ford V8-powered MG ZT 260 saloon and ZTT 260 sports estate, and the supercar-chasing MG XPower SV family, both launched in 2002.

The collapse of what had become the MG Rover Group in 2005 brought an end to these final MG V8 marvels. The book provides an excellent opportunity to tell for the first time the complete and in-depth story of these remarkable MG V8s.