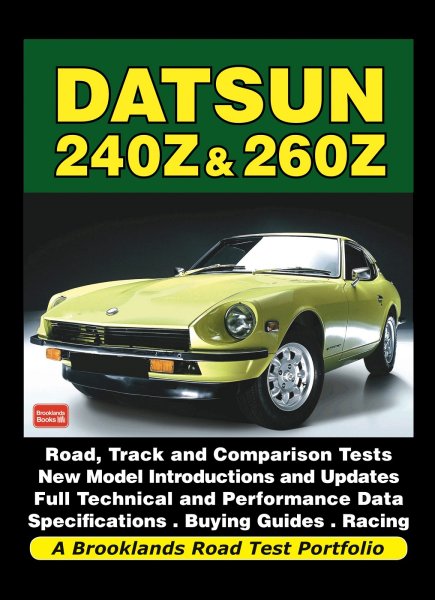 Description
Description
You can get some idea of the importance of the Datsun 240Z when you realise that Nissan, owners... more
Close menu
Datsun 240Z & 260Z — Brooklands Road Test Portfolio

You can get some idea of the importance of the Datsun 240Z when you realise that Nissan, owners of the marque, in the 90's commissioned a specialist to restore batches of 25 year old 240Zs to as new condition so that they could sell them through their own showrooms alongside modern Nissan products. The 240Z, for Nissan, is its heritage. You might wonder why the 260Z is not subjected to the same treatment, and the answer is that in the USA at least, the original is still considered to be the greatest. It was the 240Z which conquered the sports car market from the British, and the broadly similar 260Z which followed it was more of a relaxed boulevardier and less of a sporting machine.

None of that, of course, makes the 260Z a less worthy car, it is, quite simply, different because it aimed to do different things. American customers wanted more creature comforts - which is why they were offered an automatic option on the 240Z when other countries had only a five speed manual - and Datsun developed the car to meet the demands of its largest market. The 240Z wasn't Datsun's first attempt at a sports car, of course, but the roadsters built between 1962 and 1971 never had anything like the same sales success. A cynic might argue that the moribund state of British sports cars in the early 70's gave more that a helping hand to the Japanese contender, but there can still be no doubt that the Datsun was a class act.

The 240Z and 260Z scored in reliability (where British models were increasingly failing), they scored in performance, and they scored in their excellent handling balance, achieved by setting the big straight-six engine well back in the structure. There was plenty of room inside, even though the cabin was a little austere to look at, and there was also no doubt that the Datsun's hardtop coupe configuration gave it additional appeal at a time when the safety aspect of open cars was beginning to be questioned. Attractive styling played its part too, and it is interesting that the 240Z and 260Z came from the drawing board of Albercht Goertz, the same man who had penned some of the classic BMW models of the later 1950s and early 1960s. Enthusiasts today look upon the 240Z as one of the first really great (as distinct from merely competent) cars to come out of Japan.

The articles reproduced in this book do a fine job of showing why that should be so. Included are road, track, comparison & long term tests, new model introductions & performance data, tuning & racing plus advice is offered on acquiring a good pre-owned 240Z & 260Z.