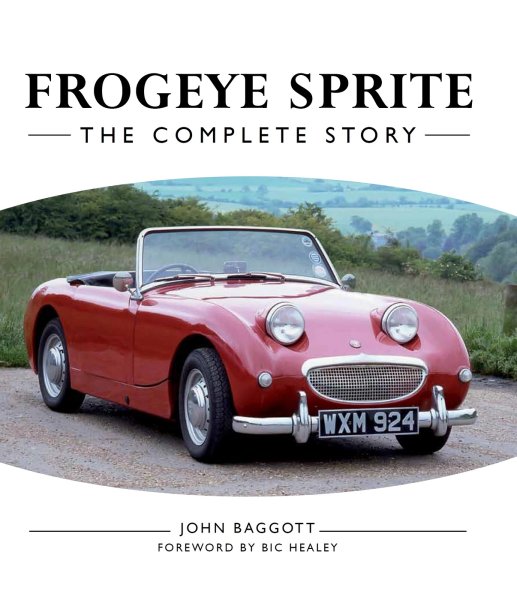 Description
Description
by John Baggott This is the only book to have been written exclusively about the iconic Mark... more
Close menu
Frogeye Sprite — The Complete Story

This is the only book to have been written exclusively about the iconic Mark I Austin Healey Sprite. The headlights in the bonnet and unusual radiator grill shape gave the car a cheeky grin, so it soon gained the name "Frogeye", or "Bugeye" in America and Australia, where the Sprite also has a huge following. The book traces the model's history from its inception and development to its metamorphosis into production - which was not without its early problems.

The book follows the Sprite's successful forays into racing and rallying, where such luminaries as Stirling Moss, John Sprinzel, Paddy Hopkirk and Alec Poole surprised many by proving that despite its size the car could still eclipse larger, more powerful and exotic machinery. A number of bespoke grand touring versions, like the Sebring Sprite, Alexander GT, Lenham GT and the one-off Lumbertubs Sprite are also featured. There are detailed chapters on the Frank Costin-designed Speedwell GT and Douglas Wilson-Spratt's WSM. The modern-day versions such as those built on the Isle of Wight by Keith Brading's Frogeye Car Company, along with the BMC Mini-based Banham Sprint and the Tifosi Rana are also covered.

Today's Frogeye owners enjoy tremendous support from clubs who run events and provide technical information. There are also a number of specialist companies that supply spares or service, repair and restore Sprites. The final chapter sets out the interesting history and details of those organizations which will be helping enthusiasts continue to enjoy their cars and keep them on the road for many years to come.

The book is a mine of information about this simply designed British sports car that continues to be held in high esteem fifty-five years after it was launched.