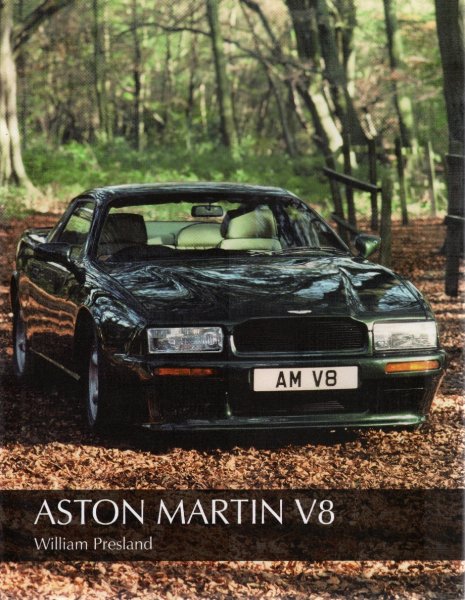 Description
Description
by William Presland The 1967 DBS laid the foundation for the next generation of Astons, but... more
Close menu
Aston Martin V8

The 1967 DBS laid the foundation for the next generation of Astons, but the 1969 DBS V8 is where the story really starts. The superb V8 engine, initially of 4.8 litres, developed for the DBS was an engineering "tour de force", producing over 300bhp in standard trim. Silky smooth, it was refined yet powerful and eminently tuneable. However, some early failures led to more development work and the engine was not finally ready until mid-1969, by which time it had evolved into a 5.3-litre unit.

In 1972 the company was sold and the last of the 'DB' cars came off the production line in 1973 to be replaced by the AM V8, a subtly modified and updated DBS V8. In late 1974, at the height of the oil crisis, the company hit problems and the receivers were called in. After being shut for most of 1975, production restarted in earnest under new ownership in 1976. A new Lagonda saloon was announced later that year. Designed by William Towns, it was a most startling piece of design. However, the state-of-the-art electronics were well ahead of their time and it was 1978 before the company produced a working version of the car and a further year before it was fully ready for the buying public.

A Vantage was introduced in 1977 and helped keep Aston at the top of the supercar league. The third new car to be introduced was a convertible. Launched as the V8 Volante, the car was an immediate sales success in the USA, and as such did not reach UK customers until 1980, a year that saw AML change owner yet again. It also saw the Bulldog appear - a one-off prototype with gullwing doors and LED instrument panels.

Throughout the 1980s more cars were introduced, including the Vantage Volante, a revised V8 saloon with electronic fuel injection, the Zagato, and the final car of the decade, the all-new Virage. By this time Ford had taken a share in the company. Series production of the Virage began in 1990, just at the start of an economic recession. Sales for 1990 were good, with many orders dating back two years, but by 1992 times were desperate. Despite being purchased outright by Ford in 1991, only careful use of cash saw the company survive and another new model, the DB7, introduced. Acclaimed as one of its most beautiful cars of all time, the DB7 was the first Aston in almost twenty years not to feature a V8, and saved the company from bankruptcy. The V8 continued though, with a Virage-based Lagonda saloon and estate followed by a Volante. In 1993 came the Vantage, and in 1995 the V8 coupé.

The story was to end by the late 1990s as the venerable V8 could no longer meet emissions regulations. To celebrate the engine and to finish the production, two special editions were announced, the Vantage Le Mans and the Vantage Volante Special Edition. The last of 5.016 V8-powered cars, a Volante Special Edition, left the factory on 20 October 2000, ending an era for Aston Martin that had seen it go from boom to bust until its flourishing success under Ford's wing.