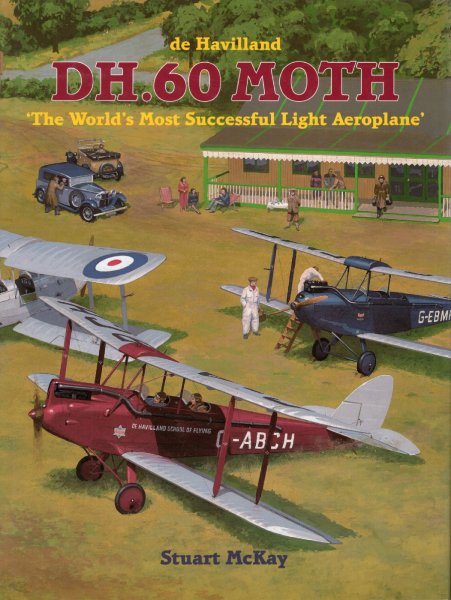 Description
Description
by Stuart McKay This book examines the history of the DH.60 Moth, which was first built in... more
Close menu
de Havilland DH.60 Moth — The World's Most Successful Light Aeroplane

This book examines the history of the DH.60 Moth, which was first built in the 1920s and was one of the most significant aircraft built up to that time. In the 1920s the Air Ministry, aware of the need to encourage an interest in flying in order to have a base of potential recruits for the RAF in a time of crisis, produced specifications for an aircraft which could be used by flying clubs which it was subsidizing. The officially backed prototypes were not favored, and it was de Havilland's freelance DH.60 Moth which first flew in February 1925 that proved ideal. The Moth quickly became the ideal private owners' airplane. As the efficiency of production increased, engines were improved and the cost of the aircraft dropped. To the DH60 Moth can be directly attributed the beginning of the flying club movement in many parts of the world and the growth of private ownership of light aircraft which is still flourishing today. Moths were built under license in France, Sweden, Finland, and the USA. They were raced, aerobatted in formation, used by most long-distance pilots of the 1920s and 30s seeking to create records, flown on floats and skis and used worldwide by air forces and government agencies. The successful Gipsy engine was designed specifically for the DH60 Moth, and in 1927 the Moth's wooden airframes evolved into metal structures which spawned the Tiger Moth.

This book will appeal to members of the Moth Club, to the many round the world who have flown or operated the airplane, and to those interested in aviation history. The content focuses on the early days of the Moth and its pivotal role with the early flying club days, but the story of this successful aircraft is carried through to the present day which sees many examples of this historic and seminal aircraft still taking to the skies.